Presidential candidate Andrew Yang is an American entrepreneur and the founder of Venture for America. From 2000 to 2009, he worked in startups and early-stage growth companies as either a founder or executive officer. In 2012, he was selected as a “Champion of Change” by the Obama administration and, in 2015, as a “Presidential Ambassador for Global Entrepreneurship.” 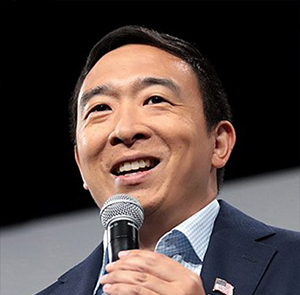