As Americans across the country scramble to finish their taxes this month, some federal student loan borrowers are facing a new obstacle for the first time – a larger tax bill due to student debt that was forgiven through income-driven repayment (IDR). Long recognized as a policy design flaw and looming threat for borrowers in IDR, this unfair tax penalty will become a growing problem for struggling borrowers in the years ahead and policymakers need to act quickly to address it because borrowers should not be hit with a potentially unaffordable tax bill after making responsible loan payments for 20 or 25 years.

Why shouldn’t the forgiven debt be taxed? Simply put, forgiven student debt is not a windfall of income. A borrower with a $20,000 remaining loan balance doesn’t suddenly have $20,000 more in spending money when that balance is forgiven.

The benefit of loan forgiveness for borrowers is severely undermined if forgiven loan balances are treated as taxable income, immediately replacing one unaffordable debt with another. It is contrary to the policy goals of forgiveness for the government-as-lender to forgive debt so that a borrower may move on only to have the government-as-tax-collector immediately demand further payment.

Additionally, it’s unfair that forgiven federal student debt is taxable in some cases but not in others. Debt forgiven due to school closures, a borrower’s total and permanent disability, and a borrower’s 10 years of qualifying public service work is not treated as taxable income, while there’s a tax penalty on debt forgiven under IDR and debt discharged when students are mistreated by their colleges. Regardless of the reason, discharged or forgiven student loan debt should never be treated as taxable income.

Who is affected by this tax penalty for IDR? Borrowers in IDR plans who still have balances remaining after making payments on their federal student loans for 20 or 25 years (depending on the plan). While many borrowers will repay their full debt plus all accumulated interest before their repayment period is up, borrowers with low incomes relative to their debt over a long period of time may receive forgiveness.

At the most recent Federal Student Aid conference in November 2017, the Department of Education confirmed that four borrowers had received forgiveness under IDR.

New from @usedgov: This week the first 4 borrowers received forgiveness of their remaining #studentdebt after 20 yrs of payments in income-driven plans. Under current law, those forgiven loan amounts will be treated as taxable income. #fsatc2017

In order to receive forgiveness last year, these borrowers must have started making payments on Direct Loans under the Income-Contingent Repayment plan in the mid-1990s, switched to the REPAYE plan after it became available in 2015, only borrowed for undergraduate education, and made 20 years of qualifying payments. While small in number, these borrowers are the proverbial canary in the coal mine as many more borrowers will become eligible for forgiveness under other IDR plans in the coming years.

How much is the tax penalty? It depends on the borrower’s individual situation, but we ran the numbers for a few hypothetical borrowers. For a small business owner with $50,000 debt who is married with two children, for example, the tax penalty could double the amount of taxes the family owes – adding $13,050 to their federal income tax bill for that year. 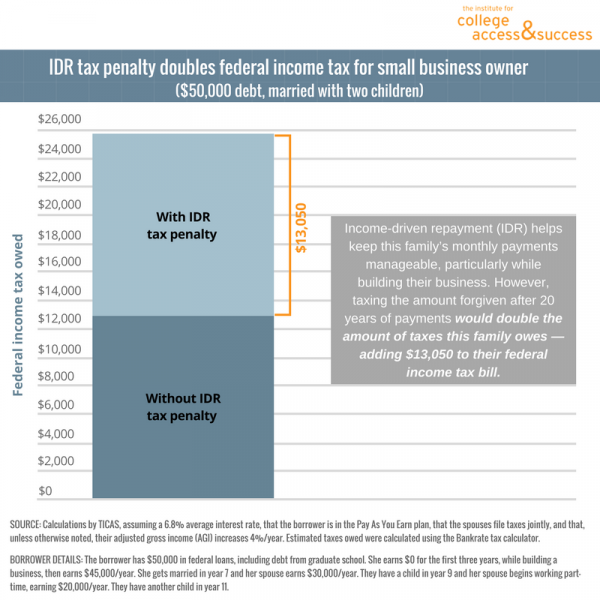 How can this tax penalty be fixed? The U.S. Congress can remove this tax penalty by changing the law. Recent bipartisan tax reform legislation included the elimination of this tax penalty for borrowers who received student loan discharges due to total and permanent disability, and Congress needs to do the same for struggling borrowers in IDR. Bipartisan legislation to eliminate the taxation of debt forgiven under IDR has been introduced in the past and supported by a broad constituency of colleges, student loan lenders, financial aid officers, and student advocates.

In the meantime, states can pass legislation to at least make sure that federal student loans forgiven under IDR are not treated as income for state tax purposes. For example, California passed legislation last year to address this tax penalty at the state level.

What can borrowers do if they received IDR forgiveness and face an unaffordable tax penalty? Seek out tax advice and/or reach out to the IRS. You may be able to pay the tax in installments or qualify to exclude some or all of it from your income based on the insolvency exception under IRS rules. If you later receive a notice from the IRS and need to correct your filing, have a dispute with the IRS, or get audited, you may qualify for the IRS’ Low Income Taxpayer Clinic program.

Also, please reach out to us if you or someone you know is being taxed after receiving student loan forgiveness. Your stories can help make this issue real for policymakers and support necessary policy change!