Oakland, CA – More than six in ten (62%) college seniors who graduated from public and private nonprofit colleges in 2019 had student loan debt and they owed an average of $28,950, according to Student Debt and the Class of 2019 , the 15th annual report on student debt at graduation released today by The Institute for College Access & Success (TICAS).  This is a lower share of students than the Class of 2018 (65%), and a very slight decline (less than 1%) in total debt from the 2018 average of $29,200.

The slowing and recent pause in student debt growth for college graduates is encouraging news. Increases in state spending and grant aid are both likely contributing factors, as well as broader economic improvements in the years prior to the COVID-19 pandemic. However, the public health crisis has already reshaped the higher education landscape in important ways and placed profound financial pressures on states, colleges, and students that could already be making college less affordable and increase reliance on student debt.

“After years of declines in state funding driving greater student debt, the recent leveling out of student debt shows the value of investments in higher education,” notes Debbie Cochrane, executive vice president of TICAS. “However, neither state investment nor student debt levels have recovered from the Great Recession, and the COVID-19 pandemic risks putting the progress in jeopardy. Students and families are looking to federal and state policymakers to do the hard work needed to prevent student debts from rising quickly again.”

State averages for debt at graduation in 2019 ranged from $17,950 (Utah) to $39,400 (New Hampshire), and new graduates’ likelihood of having debt varied from 40 percent (Utah) to 74 percent (New Hampshire). In 21 states, average debt was more than $30,000, and in five states it was over $35,000. Many of the same states appear at the high and low ends of the spectrum as in previous years. High-debt states remain concentrated in the Northeast, and low-debt states are mainly in the West. In eight of the ten high-debt states in 2019, debt loads increased at least twice the rate of inflation over the last 15 years.

Nationally, our analysis shows that graduates in the Class of 2019 are slightly less likely to leave college with student debt as their peers 15 years ago (62% of graduates compared to 65%), but those who borrowed left school in 2019 with a lot more debt. Over the last 15 years, debt held by bachelor’s degree recipients has substantially increased at the national level. While growth in average debt loads leveled off over very recent years, average debt loads over the 15-year period grew by about 56 percent (from $18,550 in 2004 to $28,950 in 2019), well outpacing inflation (36%).

Not all of the same colleges reported data in 2004 and 2019, and changes in which schools choose to report can limit the meaning and usefulness of comparisons across years. To help interpret the 15-year data for individual states, we developed an indicator of “robustness” that measures the level of consistency in reporting between the two years. Eighteen of the states met our standard for strong robustness, and graduates’ average debt in seven of the eighteen (39%) high robustness states grew at a pace more than twice the rate of inflation.

This 15-year analysis is based on the only type of data currently available to gauge cumulative student debt, including both federal and private (nonfederal) loans, for bachelor’s degree recipients each year, and at the state- and college-level. However, nearly 1,000 of public and nonprofit private four-year colleges did not report these data this year. 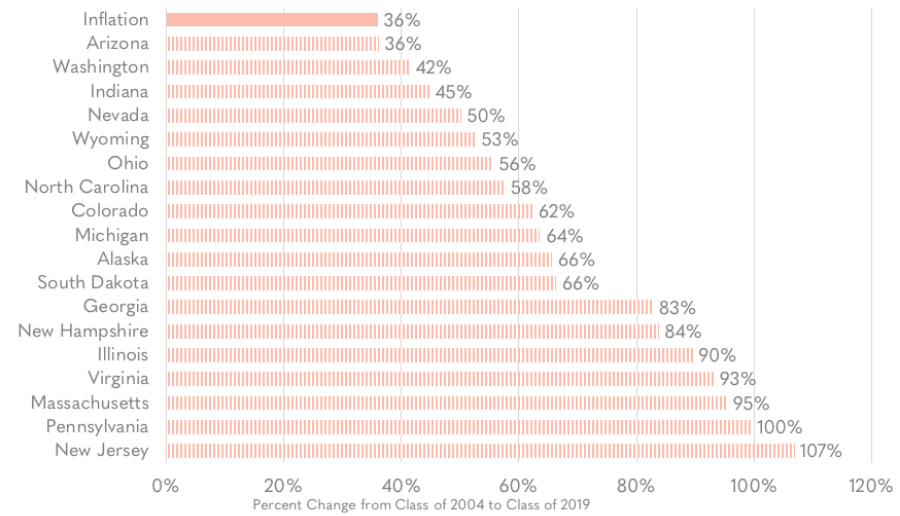 “While the voluntarily reported data used in this report remain the best available for showing to what extent student debt has grown across states and colleges over the past 15 years, they show why more comprehensive and comparable data remain sorely needed,” noted Oliver Schak, co-author of the report and TICAS research director.

The average debt held by four-year college graduates is an important benchmark for college affordability because it measures debt levels for students at a comparable, meaningful point in their academic careers. While bachelor’s degree graduates are typically better positioned than others to repay their debt, as the credential generally holds labor market value that facilitates student loan repayment, certain groups of bachelor’s degree recipients still struggle with their debt. Among students who graduated with a bachelor’s degree in 2016, 40 percent of Black borrowers and 29 percent of Latino borrowers experienced difficulty making federal loan payments within one year after graduation (defined as missing payments or as securing temporary loan relief through deferments or forbearances) compared to 22 percent and 19 percent of white and Asian borrowers, respectively. Low-income and first-generation students were also more likely to face repayment struggles.

Research is clear that Black students attend schools that have  financial resources and that provide less support throughout the education pipeline—disparities that contribute to more Black graduates leaving college with debt and having more of it to repay.  The COVID-19 pandemic may further exacerbate these problems, as well as the workforce disparities that existed before the start of the public health crisis. Now, unemployment and underemployment have more than doubled, and young Black college graduates have been more significantly impacted by the job market than their white peers.

With far too many Americans continuing to carry the weight of burdensome student debt, the report puts forward a series of policy recommendations for the federal government, states, and colleges. Among those: the federal government should double the maximum Pell Grant, inject new federal funding into public colleges, extend and expand emergency student loan relief for borrowers impacted by COVID-19, and improve transparency and oversight. Additional policy recommendations can be found in the full report.

NOTE: An interactive map with details for all 50 states, the District of Columbia is available at https://ticas.org/interactive-map/.