In a single generation, college students have lived through a sea change in how we pay for college. States slashed higher education funding even as more students pursue degrees, driving up tuition and student debt.

Turning the tide on tuition and student debt will require significant new investments in public colleges and universities. But more money alone is not enough. To close college opportunity gaps, we need to direct more funding to the colleges serving the neediest students.

State funding for public colleges and universities – which educate three-quarters of all students – booms in good economic times and busts during downturns. Colleges saw particularly deep cuts during the Great Recession, driving up tuition by hundreds, if not thousands, of dollars. The result has been more student debt than ever before.

A new analysis from my colleagues at the Institute for College Access & Success (TICAS) examined how states funded colleges between 2006 and 2016, the years around the Great Recession. While community colleges now receive modestly more funding, they still receive nearly $2,900 less per student than doctoral universities. Including tuition, community colleges have just 37 percent of the per-student revenue of doctoral universities. 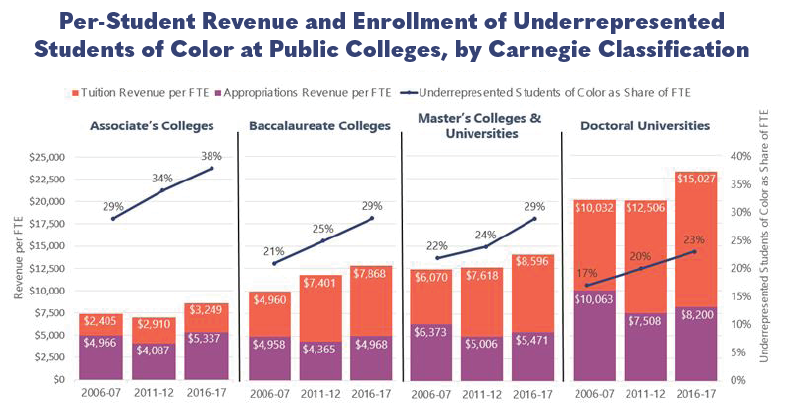 To be fair, research universities have a different mission, with different costs, than community colleges do. They also have access to different forms of revenue, such as endowments, research grants, and medical facilities.

As a result, these inequitable funding patterns not only reinforce inequitable educational attainment by race, they also undermine the potential for our most accessible and affordable public colleges to increase socio-economic mobility.

It’s encouraging news that, among two dozen presidential candidates, it is now de rigueur to put forward ambitious plans to tackle college affordability and student debt. Every Democratic free college plan so far relies on a new partnership that asks both the federal government and states to invest more in public higher education. Congressional leaders like Sen. Patty Murray and Rep. Bobby Scott have made similar proposals.

But if we want to tackle the systemic inequities in higher education, it’s not enough to spend more. We will have to spend more fairly, too. These desperately needed federal and state investments in college affordability should be paired with changes to reverse disparities that expand opportunity gaps rather than closing them.

Policymakers are rightly focused on the need for states to invest more in public colleges and universities, to produce more college graduates and reduce student debt. However, achieving our goals requires they tackle the inequitable funding patterns that perpetuate disparities.