State-by-state analysis looks at the share of family income needed to cover net price of public two- and four-year colleges, as well as number of work hours needed for the lowest income students.

By Lindsay Ahlman and Debbie Cochrane, The Institute for College Access & Success (TICAS)

Students, schools, and policymakers are increasingly concerned about college affordability, and with good reason. Yet many conversations about college affordability focus on dollar figures of the price of college, as opposed to putting that cost into context to determine whether that price is affordable. Lower income students generally face lower net prices, but even a very low cost might be unrealistic for a family with extremely limited resources. Looking at both the cost and available family resources provides a useful picture of how manageable different prices are for families with different resources.

In a new research brief, College Costs in Context: A State-by-State Look at College (Un)Affordability, we looked at the share of family income that is needed to cover that net price to explore the degree to which net prices[1] reported by colleges are manageable for families. Using a state-by-state analysis of public four- and two-year colleges, we find striking inequities in both two- and four-year public college affordability both within and across states, with the lowest income students facing the most extreme and unrealistic financial expectations.

With lower tuition costs than four-year public colleges, community colleges are frequently assumed to be the most affordable college option for students. Yet our analysis shows that community colleges are far from affordable for many students: students from families earning $30,000 or less must spend 50 percent of their total income to cover the net price of public two-year colleges. As shown below, this is a far greater burden than is placed on any other group. 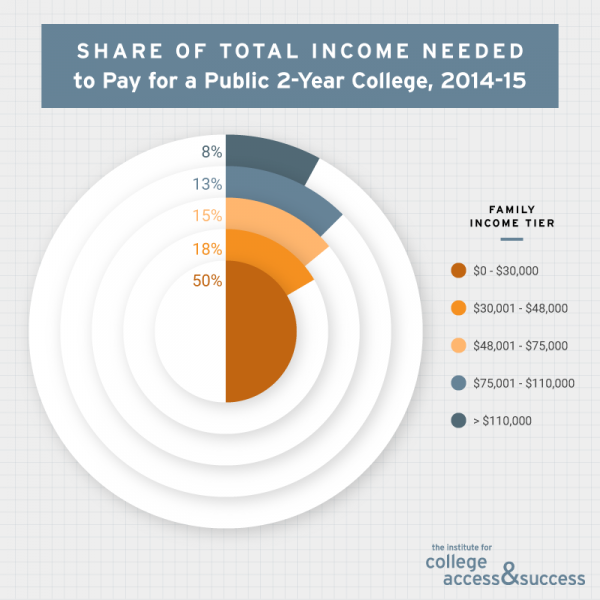 The share of income required to pay for college costs varies by state. At community colleges, the lowest income students in New Hampshire would need to spend 120 percent of their income to cover net costs, while those in Michigan would need to spend 35 percent. In 31 states, the net price of community colleges is more than half of the total family income for the lowest income students.

The data presented here underscore the difficult choices many students must make to attend and complete college, including potentially working long hours while enrolled full time and compromising their odds of graduating as a result. When we looked at the number of hours the lowest income students would need to work to cover the net price of community colleges, we find that students in 28 states would need to work more than 20 hours per week at their state’s minimum wage to earn enough to cover their net price. In New Hampshire, community college students from low income families would need to work more than 50 hours per week. 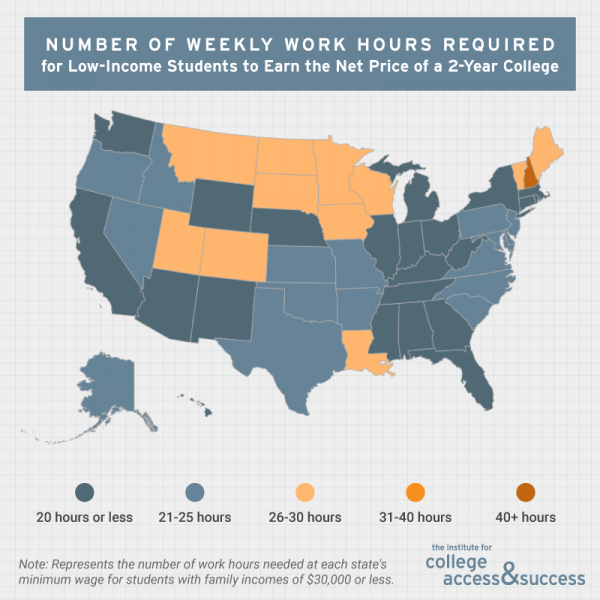 The inequitable burden of college costs on the lowest income students not only contributes to wide college enrollment and completion gaps by income, but also disproportionately affects underrepresented minority students. Among undergraduates, more than half of Latino students (52%), about three in five Native-American students (59%), and almost two-thirds of African-American students (64%) have family incomes under $30,000.

These are sobering findings, documenting an affordability problem that demands attention and underscoring the need to focus resources where the problems are most severe. TICAS recommends strengthening Pell Grants, which currently cover the smallest share of college cost in more than 40 years, improving and increasing state grant aid, and promoting state investment in higher education through a new federal/state partnership aimed at maintaining or lowering the net price of public college for low- and moderate-income students.

[1] Net price is the total cost of college – including not only tuition but also textbooks, transportation, and living expenses – minus any state, federal, and institutional grants or scholarships the student receives.