The Department of Education recently released new data for the College Scorecard, a critical consumer tool that provides vital college- and program-level data on college outcomes that are available for download. With this year’s release, the Department refreshed the Scorecard’s data, including college costs, student debt, graduation rates, and student body demographics, and they added the following new data elements:

Of the new data elements, we spotlight median debt by Pell Grant status, which can shed light on college affordability for low-income students. Most students who graduate with debt are from low-income backgrounds – national data show that over 7 in 10 of graduates (73%) with any federal loans also received a Pell grant, and that Pell graduates have about $4,500 more in debt than other graduates.[1] However, data showing differences in debt loads between Pell and non-Pell graduates has not been available by college or program until this release. These data indicate that debt disparities for students who progressed through the same education and graduated with the same degree are very common, and quite sizeable.

Looking at median debt from College Scorecard, Pell graduates also have higher debt burdens than non-Pell graduates across credentials and when compared within the same program.[2] In fact, among a combined cohort of graduates from the Classes of 2017 and 2018, the median Pell recipient graduating from a bachelor’s degree program acquires $26,863 in student loans while their non-Pell counterparts borrow only $23,395 (15% more debt for Pell students than non-Pell).[3] In associate degree programs, non-Pell graduates had a median debt of $12,250 compared their Pell counterparts who had borrowed $16,370 (34% more). Non-Pell graduates who completed certificates also borrowed $9,833 in contrast to Pell graduates with $11,814 (20% more). Across these three credentials, the median Pell-to-non-Pell debt gap is $2,553.[4]

Pell Students Graduate with Higher Debt in Three-Quarters of Programs 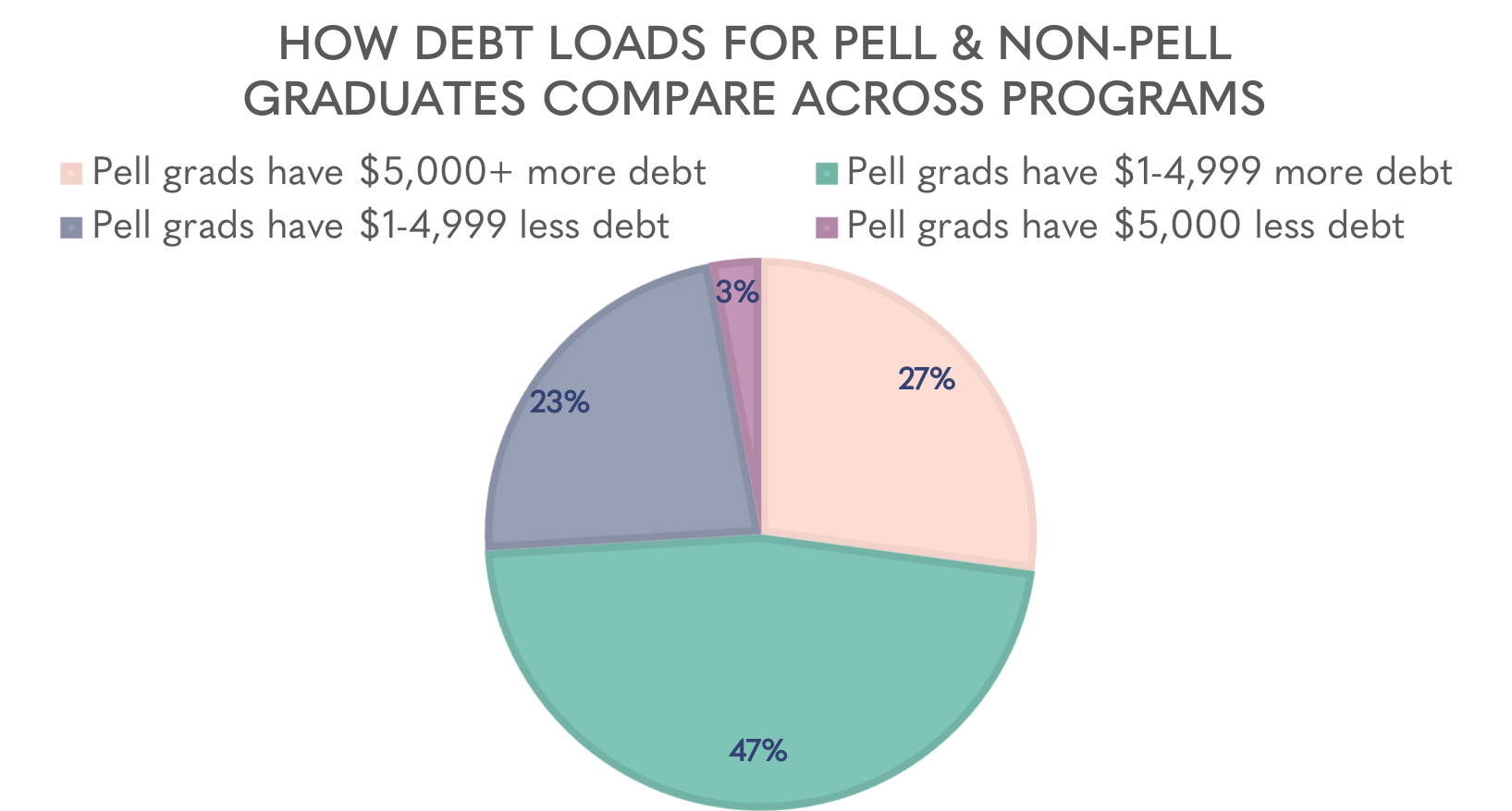 Billions Needed to Close Pell Debt Gap in Every Program

These Pell gaps mean that students from low-income families must repay more debt than their non-Pell peers, and the amounts add up in a startling way. After adding up the debt gap across programs where Pell students owe more than non-Pell students, the total Pell debt gap amounts to approximately $5.96 billion in extra loans across all three credentials, as shown in the visualization below.

* Displays the difference of average debt between Pell and non-Pell graduates multiplied by the number of Pell borrowers in each program. All figures limited to programs reporting data for both debt averages and that have a Pell gap of at least $1.

Importantly, these data may understate the true debt burden of Pell students. This is because Scorecard data exclude non-federal loans that play a crucial part in cumulative student debt of graduates. For instance, the latest Scorecard data suggest that the median debt of Catholic University graduates is between $15,500 to $27,000, depending on the program. However, Catholic University reported that indebted graduates leave school with about $46,700 in average debt once private, nonfederal loans are added in.[6] These same self-reported data show that 45 percent of their graduates’ debt consists of loans from banks, schools, or their state, not included in the much lower Scorecard figures.

Policymakers Should Double Down on Pell Grants

The federal Pell Grant program is the nation’s most effective investment in college affordability, but its purchasing power relative to college costs is at an all-time low. At its peak, the maximum Pell Grant covered 75 percent of the cost of tuition, room, and board for students attending public four-year colleges, a share that has fallen to just 28 percent today. Doubling the Pell Grant is critical to eliminating disproportionate debt burdens for low-income students, as well closing disparities in enrollment and completion by income. For more on why now is the time to double the Pell Grant, see our recent joint publication with UNCF.