Both the President’s FY14 Budget and the Comprehensive Student Loan Protection Act, reintroduced in the Senate this week, propose significant changes to federal student loan interest rates. Rather than being set by Congress, interest rates on new student loans would be tied to the U.S. Treasury’s 10-year borrowing rate that year and remain fixed for the life of the loan, even if interest rates dropped substantially. Though not identical in their details, both proposals would lower the interest rates for students and families who borrow this fall, but allow interest rates to rise steeply for those who borrow in the coming years. Based on CBO projections, interest rates for unsubsidized Stafford loans would exceed 6.8% by 2016 and rise above 8% by 2018.

Moreover, both proposals would eliminate the cap on student loan interest rates, which means that actual rates for all types of federal student loans could rise even higher than currently projected. For the first time ever, there would be no limit to how high rates could go. In addition to increasing the costs of loans and college, uncapped interest rates could deter students from enrolling in or completing college, particularly during periods of high and/or rising interest rates.

Some have suggested that an interest rate cap is not necessary if borrowers have access to an income-driven repayment plan, such as Income-Based Repayment (IBR) or Pay As You Earn (PAYE). In IBR, which is widely available, monthly payments are capped at 15% of discretionary income, and after 25 years of qualifying payments any remaining debt is discharged. In PAYE, currently only available to some current students and recent graduates, monthly payments are capped at 10% of discretionary income, and any remaining debt is discharged after 20 years. New borrowers in 2014 will have access to a similar repayment plan. The President’s budget goes a step further by providing access to existing as well as new borrowers starting in 2014. It also prevents the taxation of debt discharged through income-driven plans.

For example, to qualify for IBR or PAYE, borrowers must have a relatively high debt-to-income ratio. Second, even borrowers who qualify for IBR or PAYE can have to pay much more in total with higher-interest-rate loans. In income-driven repayment plans, the interest rate can affect both the monthly payment amount as well as the length of time in repayment. For example, a single borrower who enters repayment with $20,000 in debt and starts out making $30,000 a year (AGI increasing 4% a year) ends up paying much more in PAYE with a higher interest rate than a lower interest rate. 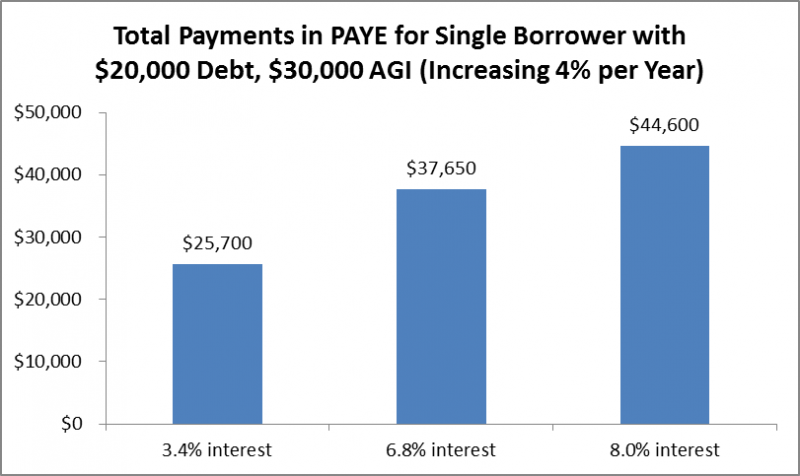 Comprehensive reform is needed to keep federal loans affordable over time, streamline the program, and better target benefits, but these recent proposals miss those marks. There is a better way forward. TICAS’ recent white paper proposes changes that keep loans affordable, simplify loans, and target benefits to those with more financial need. Our proposal includes both a universal interest rate cap and a guarantee that rates for borrowers in repayment will never be too much higher than the rates being offered to current students. As also detailed in our white paper, the benefits of the improved IBR plan should be targeted so that borrowers with very high incomes do not receive substantial forgiveness when they could well afford to pay more. Read our statement about the President’s FY14 Budget and our white paper on improving federal student aid to increase college access and success.