While the President’s proposed budget fully funds the scheduled increase in the maximum Pell Grant and continues to tie it to inflation after 2017, the House Budget Committee’s FY17 budget eliminates the $120 increase scheduled for 2017-18 and freezes the maximum grant at $5,815 for 10 years.

In the 1980s, the maximum Pell Grant covered more than half of the average annual cost of attending a four-year public college. Cutting the maximum grant and freezing it for the next 10 years would reduce the share of covered costs from an already record low of 29 percent in 2016-17 to just 21 percent by 2026-27, making college even less affordable. 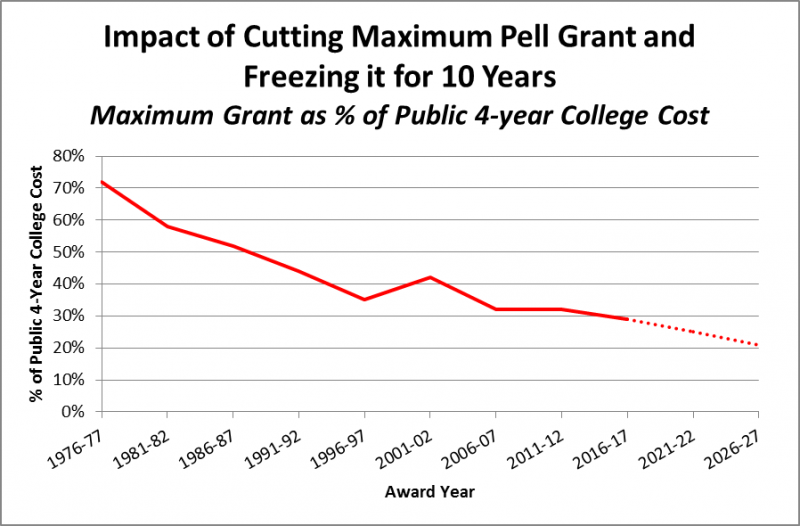 Sources: Calculations by TICAS on data from the College Board, 2015, Trends in College Pricing 2015, Table 2, http://bit.ly/1Pyv2sJ, and U.S. Department of Education data on the maximum Pell Grant. Calculations for 2017-18 through 2026-27 assume that the maximum Pell Grant is frozen at the 2016-17 level. College costs are defined here as average total in-state tuition, fees, and room and board costs at public four-year colleges. Projected college costs for future years were estimated by using the average annual increase in costs over the most recent five years.