Whatever you might have thought of the Administration’s plan to rate colleges, its current plan to provide a new tool to help consumers compare colleges could be a big win for students and families. There is broad bipartisan agreement on the need for better consumer information on college costs and outcomes. In fact, last year the U.S. House of Representatives passed bipartisan legislation requiring the Education Department “to create a consumer-tested College Dashboard that would display key information students need when deciding which school to attend.”

The Administration has not provided much detail about what it is developing other than that it will release this summer an easy-to-use web tool that lets students and families compare colleges based on criteria important to them. So what key information do students and families need to know and what would make the tool most helpful?

Here are some of the things that we and others have publicly recommended for an improved consumer information tool, building off of the current College Scorecard.

Let users compare colleges by degree level, selectivity, and location. Students should be able to filter schools in ways that align with common college selection criteria: which degree I want, what my odds are of getting in, and where the school is located. Additional filters could be considered, but the comparison groups should not be defined by characteristics that bear little resemblance to how a prospective student is likely to consider colleges (e.g., a school’s sector or Carnegie classification). Additionally, national context should always be provided so students will see if there’s a significant gap between the schools they’re looking at and schools overall.

Provide cumulative debt at graduation. Likewise, it’s critical that students and families know what share of a school’s graduates have loans and how much they typically owe. As the table below shows, schools in the same state with similar costs and proportions of low-income students can have very different borrowing rates and average debt levels. 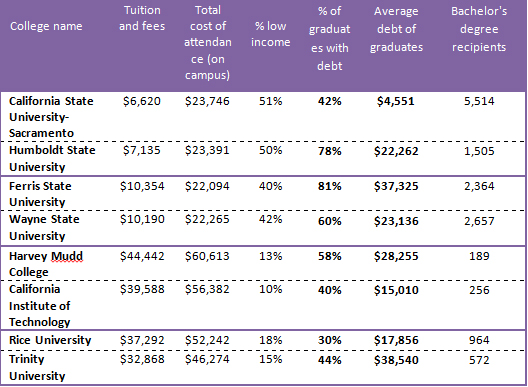 Source: Calculations by TICAS on data for 2012-13 from the U.S. Department of Education and Peterson’s. Cumulative debt data copyright 2014 Peterson’s, a Nelnet company.
Note: Figures for “tuition and fees” and “cost of attendance” are for in-district/in-state students at public colleges. Figures for “% low income” reflect the share of 12-month undergraduate enrollment receiving Pell Grants (enrollment as reported by colleges on the Department’s FISAP form).

Currently, the Administration’s College Scorecard shows the median debt of all former students entering repayment, regardless of whether they graduated or dropped out. This makes colleges with high drop-out rates look like a good deal, because students who left the school after borrowing for only a semester or two bring the median debt level down. For instance, the College Scorecards for the University of Phoenix Online (Phoenix) and University of California at Berkeley (Berkeley) show similar median federal debt for borrowers entering repayment ($17,476 at Phoenix vs. $16,436 at Berkeley). However, only 7% of first-time students seeking a bachelor’s degree at Phoenix graduate in six years, compared to 91% at Berkeley. In fact, undergraduates at Phoenix are more than twice as likely to borrow federal loans as students at Berkeley, and they borrow significantly more on average each year.

Instead of providing debt when entering repayment, we recommend using currently available data for average cumulative federal debt at graduation until more comprehensive data are available. Average debt at graduation should be accompanied by the school’s borrowing rate, so students know how common it is for graduates to have any debt.

Indicate the default risk. Students should know what share of a school’s students default on their loans. This can be determined by multiplying a school’s cohort default rate (CDR) by its borrowing rate, producing the school’s student default risk indicator (SDRI). By itself, the CDR only tells you the share of federal loan borrowers at a school who default, which may be very different from the share of students who default. For instance, the College Scorecard for Los Angeles Southwest College says it has a 66.6% default rate. However, that default rate is based on just two students defaulting at a school with nearly 11,000 students, so the typical student’s risk of defaulting at this school is actually extremely low.[1] The Department currently has the data to calculate the SDRI for each school and should provide that instead.

Pretest the tool with consumers: Ultimately, to be effective, this tool must be consumer tested, especially with low-income and first-generation students.

The Administration clearly listened to feedback on its college ratings framework. We hope it considers these recommendations as well so that the new college comparison tool gives students and families the information they need to make more informed decisions and helps encourage colleges to focus more on their affordability and student outcomes.