On Friday, June 26, the U.S. House of Representatives is expected to vote on student protections against fraudulent colleges. If successful, the bipartisan vote gutting House Joint Resolution 76 will override President Trump’s first domestic policy veto and block the borrower defense rule. If not, students will be on the hook not only to debts due to illegal conduct of their colleges, but also college closures, just as many colleges face the risk of closure due to the pandemic and recession.

Moreover, a recent estimate suggests that 10 to 20 percent of colleges are likely to close due to COVID-19. In The College Stress Test, Robert Zemsky and his colleagues found that 10 percent of colleges face severe risk. More recently, in response to the pandemic, Zemsky said, “some of them are going to have adequate cash, but most of them aren’t. I think in the short term, it’s not 10 percent that are in real trouble, it’s 20 percent. That’s not to say 20 percent are going to close…We’re now going to have upward of 20 percent terrified. If this crisis is going to take out all of next academic year, that bottom 20 percent may never come back.”

Schools may close precipitously, and students often have extremely limited options for transferring credits and continuing their studies. Students who are unable to complete their education because their college closed and do not transfer to another school within three years are entitled to have their student debt written off. However, in practice, few can successfully navigate the bureaucracy and get this relief. The Department of Education estimated that 47 percent of students whose schools close would have neither re-enrolled nor received a closed school discharge three years after the closure.

Since 2016, the Department has used its student aid databases to automate this process for students. Any student whose college closes and does not enroll elsewhere within three years has her debts automatically wiped clean. But the new borrower defense rule eliminates that provision, bringing back the paperwork that nearly half of all students the help to which they are entitled – just when many colleges are expected to close. 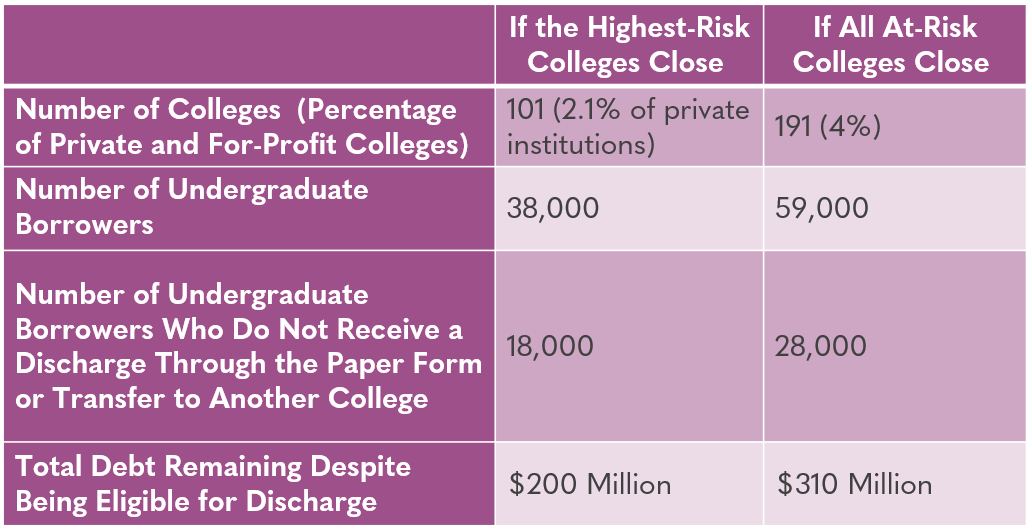 We estimate the amount of undergraduate loans that could potentially receive Automatic Closed School Discharges (ACSD) based on several assumptions about which institutions have greater financial risk and how many borrowers will be leave school without being able to continue their education. We begin with University of Pennsylvania professor Robert Zemsky’s estimates that up to 20 percent of colleges are at risk of closure due to financial challenges. In The College Stress Test, Robert Zemsky and his colleagues found that 10 percent of colleges face severe risk.  More recently, Zemsky said, “it’s not 10 percent that are in real trouble, it’s 20 percent. That’s not to say 20 percent are going to close. But it ups the possibility. We’re now going to have upward of 20 percent really terrified.” Similarly, Moody’s concluded that 10 percent of colleges face “more material credit risks” as a result of the pandemic and recession.

We identify the number of brick and mortar campuses (eight-digit OPEIDs) that have greater financial risk and could potentially close in the near-future. We produce lower and higher estimates based on the colleges with FY 2018 Financial Responsibility Composite Scores below 1.0 and 1.5, respectively. We use 1.5 for the higher estimate since the U.S. Department of Education requires additional oversight and letters of credit for institutions below this threshold, which indicates financial risk prior to COVID-19.[i] These institutions exclude public institutions and we assume for our analysis that public institutions are unlikely to close without merging with another public college or having a robust transfer arrangement that would make ACSD unlikely.

We calculate figures on lower and higher thresholds to take into account uncertainty about how financial risk has changed since 2018. We also exclude institutions from both estimates that predominantly serve students enrolled partially or fully online, assuming these institutions may be able to increase enrollment and improve their financial position due to the surge in online education during the COVID-19 crisis.[ii]

Next, we calculate the number of students at the above-mentioned institutions that have loans eligible for ACSD. We add up the number undergraduates who had federal loans in 2017-18 based on IPEDS data and then we multiply that number by 47 percent—our assumption for the percentage of students who will be unable to receive a discharge through the paper form or reenroll at another institution based on analysis from the U.S. Department of Education Borrower Defense Regulatory Impact Analysis.[iii] The resulting estimates (low, medium, and high) of potentially eligible borrowers are conservatively low because they exclude all graduate borrowers in addition to undergraduate borrowers who previously took out loans at the same institution but did not borrow in 2017-18.

We calculate the amount of loan volume receiving ACSD by multiplying the number of eligible borrowers by the average amount of debt per borrower, which we assume to be roughly $11,000 based on cumulative ACSD data from 2013-2019.[iv] The estimated average discharge amount per borrower may be somewhat lower than future actual amounts of ACSD cancellation, particularly if closures become more highly concentrated at residential private, four-year colleges that are relatively more expensive than previously closed institutions. If so, the total debt affected would be larger.

[ii] We identify predominantly brick and mortal institutions (not online) as those where at least 50 percent of students are enrolled exclusively on campus based on IPEDS distance education enrollment data for fall 2018.