The Missing Middle: Borrowers Who Aren’t Either Defaulting or Repaying

This post was updated on 3/20/17 to reflect repayment rates revised in January, 2017

In an effort to hold colleges accountable, the U.S. Department of Education measures how many borrowers from a college default on their loans – a “cohort default rate” which measures just the tip of the borrower-distress iceberg. In conjunction with its College Scorecard, the U.S. Department of Education has also begun releasing college repayment rates, which measure the share of borrowers paying down the principal balance on their federal loan debt.

As the Department states in its College Scorecard documentation, default rates “can be manipulated through the use of allowable nonrepayment options like deferments and forbearances” which serve to temporarily keep default rates down and colleges in compliance with federal limits on defaults. Indeed, some for-profit colleges have admitted to doing just that.

While available default and repayment rates have some differences (most notably, default rates include graduate students and the repayment rates do not), they are comparable enough to identify trends and outliers. Comparing default rates and repayment rates tells you about how many students have avoided default but still aren’t paying down their loans: perhaps they’re delinquent, in forbearance or deferment, or in a repayment plan where their balance is growing rather than shrinking. And in schools where default rate manipulation is occurring, this group of borrowers – the missing middle group of those neither in default nor paying down their loans – will be atypically large.

Across all schools, this missing middle group makes up about 44 percent of borrowers three years into repayment on average. But at 456 schools, 60 percent or more of borrowers are neither in default nor paying down principal. The vast majority of these schools (78%) is for-profit colleges, including Kaplan University which previously hired private investigators to track down former students to put them in forbearance. It includes CollegeAmerica, sued by the U.S. Department of Justice for violating rules on incentive compensation and by the Colorado Attorney General for fraud. It includes National College, which last August was ordered to pay $157,000 to the state of Kentucky for its years-long refusal to comply with a subpoena related to potential job placement rate falsification. It includes now-shuttered Westwood College, which had faced charges of deceptive marketing and recruiting for years and been sued by the Colorado and Illinois Attorneys General. Computer Systems Institute and Marinello Schools of Beauty, both of which were cut off of federal aid after this year having been found in violation of several federal rules, also made the list. This group of schools also includes some Everest College campuses that remain open for business. While Everest schools have new corporate management, the former CEO had this to say about managing cohort default rates during a 2011 investor call: “Forbearance, as you well know, is a pretty easy, just a question you have to agree to it and you’re on your way.”

​Forbearance abuse for the purpose of evading accountability is well documented in the for-profit college sector, but has not been documented at other types of institutions. The pie chart below shows the distribution of schools where 60 percent or more of borrowers are neither in default nor paying down their loans three years into repayment, and the list of schools is available here. 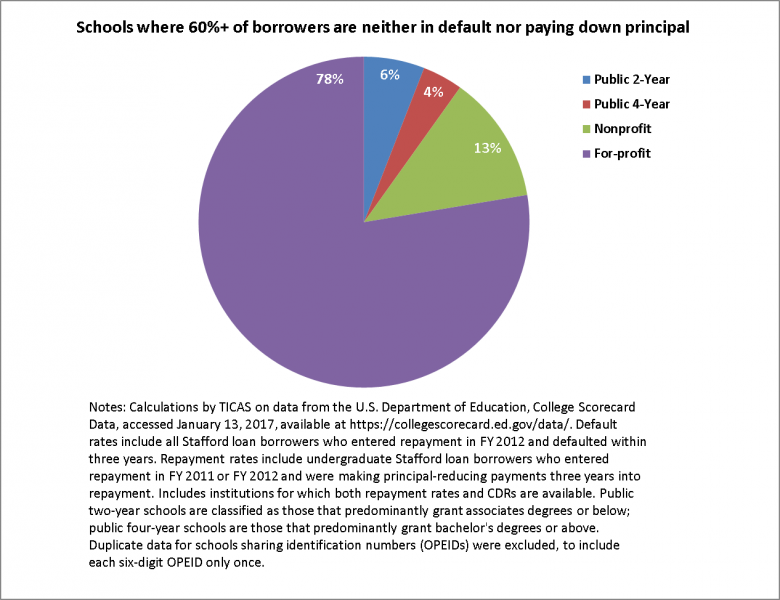