Earlier this week, the Department of Education announced a new process to resolve about 21,000 applications for borrower defense discharges, available to students whose schools have mistreated them in violation of state law. For some of these students, the resolution of their applications will lead to full student loan discharges and allow the students a fresh start. Other students, however, will receive partial discharges, meaning that their loan balances will be reduced but not eliminated. While the resolution of these claims is long overdue, we have both questions and concerns about how the amount of relief provided to each student is being determined.

The announcement explains a new approach for deciding whether students with valid claims will have their loans written off or only reduced. Students’ earnings will be compared against the average earnings of students from comparable programs that passed the gainful employment standard, a rule designed to ensure that career education programs are adequately preparing students for gainful employment in a recognized occupation. In effect, this approach would contrast what harmed students are earning against what they might have been earning had they attended a better program leading to the same credential in the same area, and discharge a proportion of their debt based on how their earnings compare to those of passing programs’ graduates. For example, “students whose current earnings are less than 50 percent of their peers from a passing gainful employment (GE) program will receive full relief.”

Even conceptually, this approach is highly problematic. A student lured into enrolling in and borrowing for a worthless program might see minimal to no relief if they were paying their bills by working in a completely unrelated job, earning minimum wage. This effectively punishes borrowers who manage to stay afloat despite being mistreated by their schools, akin to a “lemon law” that doesn’t require manufacturers to reimburse or replace cars if consumers can afford to buy a replacement car themselves.

Yet practical questions remain about how this process will work, and the answers may raise additional concerns.

First, how will the Department consider the borrower’s earnings, when calculating relief? The wording of the announcement seems to suggest that an individual student’s actual earnings would be used to determine the relief amount, but several news stories have indicated that the Department will instead consider the average earnings of graduates from the program the student had attended. But individual students may have different experiences, and many students will have incomes far lower than the program mean or median. This variation in students’ experiences is likely particularly common within gainful employment programs because the Department’s data sometimes combine multiple campuses.

Including only students who completed their program will likely overstate the earnings for all students who attended that program. Because noncompleters are likely to have lower earnings on average than the completers in the earnings data the Department is reportedly using to calculate relief, using completers’ earnings will drastically minimize the amount of relief being made available. This is an especially concerning issue for borrowers who attended Corinthian Colleges (a chain of for-profit schools known more commonly as Everest, Wyotech, and Heald) because a clear majority of Corinthian borrowers did not complete their programs. For example, College Scorecard data show that 61% of students borrowing federal loans to attend Corinthian schools left their programs without completing. 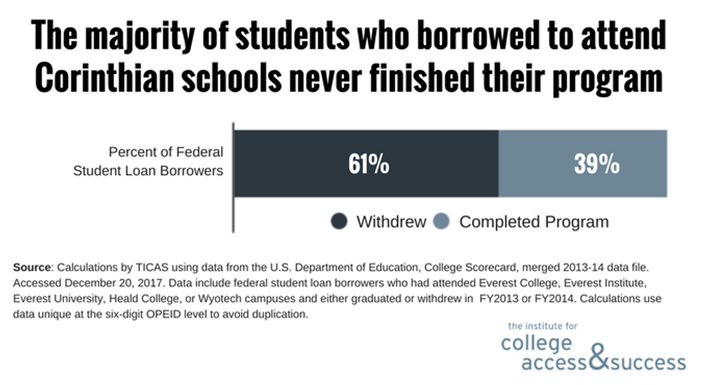 Moreover, earnings data are not available for all programs. Most of the nearly 100,000 pending borrower defense claims come from former students of Corinthian Colleges, where the Department itself helped to document widespread, substantial misconduct of the sort that makes students eligible for loan discharges. In fact, the misconduct was so pronounced that the Department created an expedited borrower defense application process for students who had borrowed to attend over 700 Corinthian programs.

The Corinthian Colleges schools that remain open were purchased by a nonprofit, Zenith Education Group, in 2015. This distinction between for-profit and nonprofit status is relevant because the gainful employment rule – data from which borrower defense discharge amounts will reportedly be pegged – applies to virtually all programs at for-profit colleges as well as certificate programs at public and nonprofit colleges. Despite the fact that Zenith agreed that the purchased schools would continue to comply with the gainful employment rule as a condition of the sale, the Department’s gainful employment data exclude virtually all degree programs from former Corinthian schools. As a result, there are no publicly available earnings data from these programs. Hundreds of the programs for which the Department had created an expedited borrower defense process were degree programs, and this week’s announcement is silent on how discharge amounts would be determined in cases where program-level earnings are unavailable.

If the Department’s process is intended to adjudicate borrower defense claims from mistreated students in a way that “makes them whole,” this approach misses the mark. It is also important to remember that even full loan discharges and refunds are still only partial relief for students who, in addition to having borrowed federal loans, may have used up eligibility for time-limited grants, taken out private loans that can’t be discharged, and invested their own time and money into their education. These are resources that students can’t get back. Figuring out ways to pinch pennies out of students’ federal loan discharges is ill-advised, and the Department’s plan for doing so is ill-conceived.